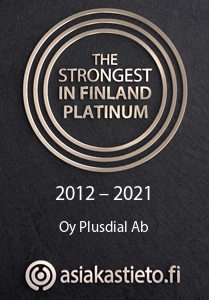 It all started with SMS – and has gone a long way since!

Back in 1980’s, a Finnish engineer named Matti Makkonen, sometimes referred to as the “Father of SMS”, worked for the Finnish Telecoms and Postal agency with standardization of future telecom networks, the Nordic NMT and soon, GSM. The SMS was originally meant to be one-directional service for telecom operators to send e.g. notifications of voice mails but developed by 1993 largely due to Mr. Makkonen’s contribution to be the person-to-person messaging service as we know it. Soon, SMS was further enhanced with possibility to charge customers for digital services by 1998. Both the P2P and premium-rate SMS services were first launched commercially in Finland.

Soon thereafter, the idea of using SMS in public transport ticketing idea was developed by Plusdial’s future founder Ari Pakarinen; he received a message while running – without a ticket – to catch a tram. Why couldn’t the message be the ticket he so sorely needed!

So now, the Premium SMS, combined with Plusdial’s patented method for proving mobile ticket’s authenticity, had acquired yet another use – making the phones in people’s pockets their personal ticket vending machines!

The company Plusdial was founded in 2000 to start a development project with Helsinki City Transport that resulted in selling the first mobile ticket in the world in September 2001. The pilot was turned to production service which Plusdial delivered for years to come; the very well-liked service was even chosen as “The Best SMS Service” in Finland for 3 years in a row.

Time to look outside Finland

Having honed the service and related processes, Plusdial started internationalization (often through pre-study projects) in 2004. First pilots – that soon became production services due to their popularity and reliability – were opened in Sweden in 5 cities in 2006; This number grew to 15 cities in 2007. Two new public transport authorities (PTAs) launched Plusdial services in 2009, and in 2011 also the biggest PTA of the capitol area, Stockholm, joined. In 2013 integration to 3rd party payment providers was carried out. Unfortunately today, after a market presence of 9 years, Plusdial is no longer providing ticketing services in Sweden due to payment service requirements that eventually eroded and alienated the customer base – but we are proud to have paved the way for latter services, and made ordinary Swedes’ everyday life a bit easier during those years!

In 2007, SMS ticketing service was also started in Flanders Region in Belgium, first as a pilot project in Antwerp and Ghent and with just one mobile operator. Soon, also other telecom operators joined in, and the service was expanded to whole Flanders area. In 2015, the monthly ticket sales of the local PTA, De Lijn, reached 1 million tickets. Still, on Premiums SMS alone!

Too good an idea to keep to oneself – we welcome partners, too!

Plusdial have always been a lean organization ourselves. We intend to maintain our ability to react to our customers’ needs quickly and with as little bureaucracy as possible. Communications should not be made a problem either, so if we do not speak your language, we’ll find a partner who will (or let the partner find us)!

It is not an unusual requirement – rather a rule – that communication in service production is required to be handled in local language(s). We do admit that we do not master all of them, so we formed partnership with companies who do.

In Italy, PTAs have not developed their own ticketing applications as often as in other markets. This does not mean that they would need to limit using mobile tickets to only such traffic modes where ticket validation or inspection would be limited to only human readable formats, like SMS. We provide e.g. Milan with a solution where each ticket is inserted to metro gate back-office system and presented for the readers at the gates also in QR code format.

In Italy, public transport is not the only field where Plusdial platform is utilized. By PTA customer demand, the ticketing service was transformed to collect also parking and congestion payments! Parking service was launched in Padoa in 2016, and mobile congestion charge service was opened in Milan in 2017, as did parking service in Alessandria. More services – transport and parking – are on the pipeline in Italy, too.

Italian telecom operators have also launched their own mobile applications, which can also be used to order tickets of the all 20+ cities.

They say that the only permanent thing is constant change. SMS is – even today – serving mobile ticketing remarkably well – after all, Premium SMS is the one and only payment method you don’t need to separately register for, nor to have credit cards attached to it, thus allowing quick ticket purchase even to new customers at the very moment you’re at the bus stop. However, smart phone applications provide more versatile communication and wide range of also other payment methods. Regulation also demands for more open data, even open ticketing. An increasing number of third parties, like telecom operators, banks, sports clubs, marketing and loyalty programme providers and lastly, but certainly not the least, various MaaS (Mobility as a Service) companies want to add public transport ticket purchases to their own mobile applications.

It would sound tempting to require PTAs just to provide a simple API for ticket sales, but in reality, there are quite a lot of other viewpoints that a PTA has to keep in mind: Electronic tickets will have to be created, first of all, with sufficient security features against forgeries and copying. An interface to ticket inspection infrastructure has to be implemented in order to make it possible to control tickets; a user interface will be needed for service management and for end customer care – like handling feedback and refund claims – and sales will need to reported to corresponding PTA systems. Additionally, tools for various customer loyalty and marketing campaigns should be supported by creating campaigns and new ticket products on the fly. And all of this will have to made with 24/7, 100% service uptime and respecting GDPR, PSD2 and other regulation, and in accordance with the requirements of the ISAE 3402 assurance standard!

So, it is not “just a ticketing API” that PTAs should provide and maintain, but also interfaces to inspection and reporting; they’d have to adopt to new 3rd party user interfaces, etc. And all this towards not just one 3rd party, but potentially dozens of them!

The Belgian De Lijn was one of the first PTAs in the world to realize these needs and to tackle them in cooperation with Plusdial. By spring of 2016 an Open API specification was published and implemented to first 3rd parties. Now, in addition to De Lijn’s own application, there are over 10 3rd parties connecting via this Open API, and a few more are on the pipeline.

And not the least due to Plusdial’s long track record, experience, unbeaten service levels, and “can do” attitude, in October 2018 Plusdial was awarded for the 3rd consecutive time with De Lijn’s mobile ticketing provision agreement.

Ok, so far so good, but let’s see the numbers?

As far as Plusdial’s milestones in terms of digital ticketing sales are concerned, here are the numbers:

Add almost 20 years of experience in understanding and learning public transport needs, and connectivity to dozens of telecom operators’ messaging systems and Premium SMS and Internet based payment systems, 3rd party payment providers, PTAs back-office infrastructure, and over a dozen 3rd party application providers of different fields – and you’ll have an idea of what we have done (see also the Highlights).

However, it is our aim to be a neutral and independent party between public transport organizations and other parties – i.e. not a MaaS provider, payment service or mobile application vendor ourselves.